Born in Corpus Christi, Texas, in 1957, Jeff was raised by Ted and Peggy Anderson, older brother Mark, and sisters Christine and Gail. 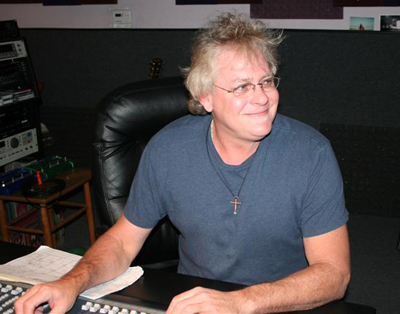 Jeff saw The Beatles on the Ed Sullivan Show in 1964, asked for a guitar for his 6th birthday, and got a ¾ size acoustic. He picked out of couple of licks left-handed, but his first guitar teacher (Ed Bennett) suggested he go right-handed. After a couple of years he worked up to an Alamo-Fiesta and a Kalamazoo amp, and did his first gig in the 4th grade talent show in elementary school.

After that, jamming with friends started. By 6th grade, he gigged at parties, and by middle school continued with garage bands and playing a lot of acoustic with brother Mark, and at his summer camp (Echo Valley) in Leakey, Texas. 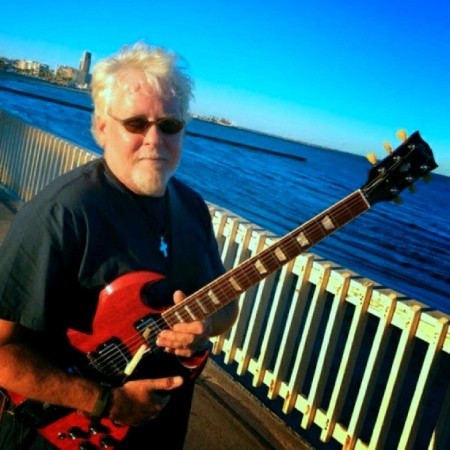 In high school Jeff joined a blues-rock band (Rio Grande), covering Muddy Waters to ZZ Top, playing school dances and beach parties. A very fun band! Back in those days Jeff would be packin’ a ‘63 Stratocaster, a Gibson SG or Les Paul through an acoustic 150-B, Sun Septure, or Fender Dual Showmann.

Jeff graduated King High School in Corpus Christi a half year early because of after-school work credits. He moved to Nashville when he was 16 with only his ‘63 Strat, an acoustic Epiphone, and a skate board. He joined a really cool Christian Church (Maranatha), then joined the church band which was full of Nashville’s top session players. He even did a couple of small tours in Tennessee, Kentucky and Ohio. Jeff lived in Nashville for two years, then moved to Denver, Colorado, for one year where he joined the musicians’ union and played some pretty unusual little gigs. Jeff then moved back to Texas. 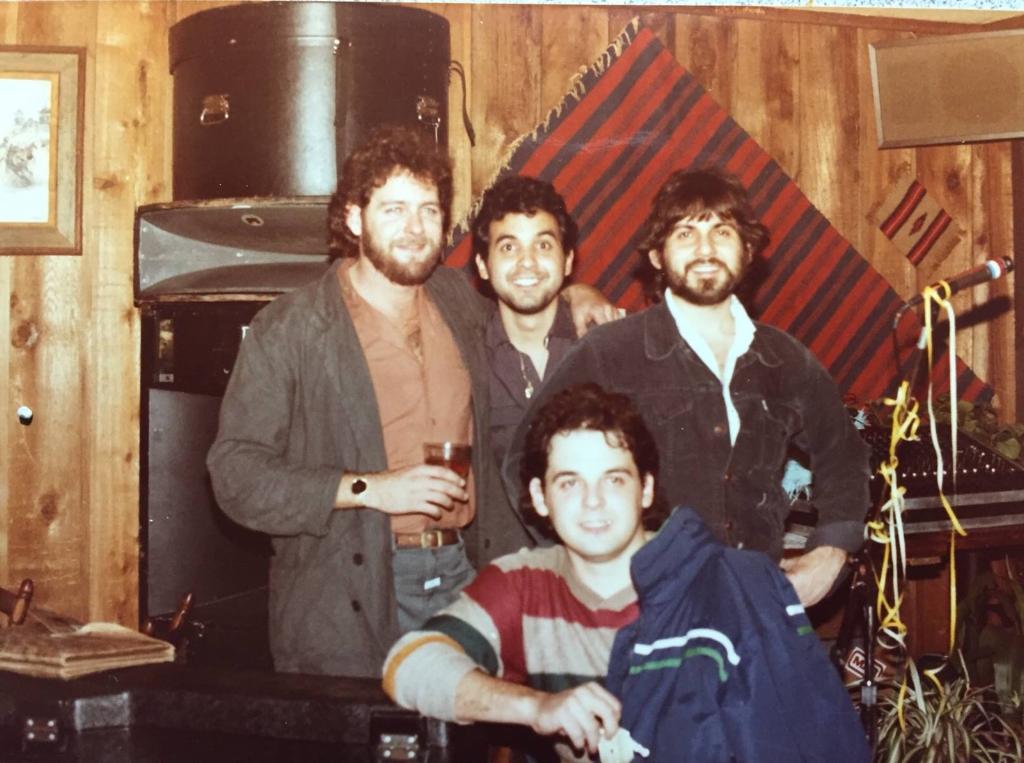 After enrolling in Del Mar College in Corpus Christi, Jeff studied two years of music theory and played in a lab band with Corpus Christi’s finest.

Next was Cactus Creek, a surfing-country-rock band that did not play anywhere that wasn’t on or by a beach. It was with this band that Jeff started singing. By this time Jeff had switched to a 60’s Gold Top Les Paul. Cactus Creek was a regular attraction at Inza’s, a honky tonk in Corpus, and played from South Padre Island to Galveston.

Jeff got an invitation to move to Del Mar, California, and bought a plane ticket. The day before his flight was to leave, he was asked to audition for Sam Neely, a fine Texas songwriter. Jeff got the gig and played six nights a week for the next three years. At this time Jeff was ripping his ‘63 Strat, Tobasco Burst Les Paul, and Lab Series amp. 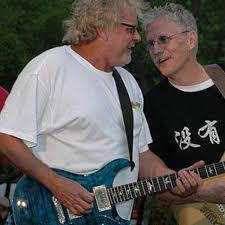 After the Neely band (In It For The Money Band), Sam took a break and the fellows stayed together. By now, the early ‘80s were upon us. All of the band’s equipment was stolen one night from Jeff’s farmhouse garage. A painting truck was spotted outside the farmhouse that same night by the band’s soundman. It was the same company that was painting the farmhouse (humm). With the help of some friends, the Corpus Christi Police Department, and a bunch of pissed off band members, the equipment was recovered. It had been spread all over West Corpus. Then was the birth of The Detectives.

The Detectives was a rock cover band covering The Police, AC-DC, Tom Petty, etc. One year later there was a change of members and a sax was added. The new Detectives (The Dicks) were funkier and jassier, playing complicated songs of Steely Dan, Al Demiola and Fussion, to the big dance numbers of Sly and the Family Stone and Rick James. The Dicks rocked Cooper’s Alley in Corpus every Monday night for two years, and gigged all over town and in San Antonio. 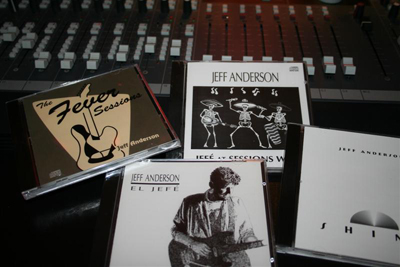 The Dicks, with some member changes, became Ray Band – a great band, but a terrible name. Ray Band had the same format as the Dicks, except for a psychedelic ‘60s set, but did not have the spark of The Dicks. Ray Band lasted one year.

Jeff had started writing songs, but had not been playing them live. There was another long line of bands in the early ‘80s. Soire, a three-piece power trio; Suckers on Parade, another Steely Dan rock band; and Hot Pursuit, the Del Mar jazz band. Jeff played a little guitar in that band, and played a Ricky Ricardo bongo drum and sang songs in different languages. But he still got to blow four or five Larry Carlton solos nightly. Hot Pursuit played from Corpus to South Padre Island, and lasted about one year.

The next band was another power trio, The Scare. Spooky! The Scare played Peter Gabriel to Los Lobos. They went into a small studio and demoed four songs – Jeff Beck, etc. It turned out very well. He was ready to record some of his own songs. The Scare lasted about one year.

Before Jeff would move to Austin, he played in one more band, The Technobrats, as a sideman. A B-52 new wave scene. Jeff did not last long with a waffle haircut and a guitar with no head stock. Change was in the air.

With a very exciting invitation from Stevie Ray Vaughn’s Double Trouble, Jeff was to move to Austin and start work on his new CD. Stevie was in his prime, and Double Trouble was on fire. This was very cool and was great for Jefe’s career and the CD. They would track four songs at the fire station in San Marcos, and finish the songs at Arlyn in Austin, combined with the Rockville sessions and other Lone Star sessions. In 1988 Jeff released El Jefe’.

Now it was time to put a band together and perform the new CD live. They were playing it on the radio, and it was time to move. Jeff would stick to his Corpus players, and also use many of Austin’s A list. They would play in the next 10 years, every top club in Austin and other Texas venues. Also, Blues on the Green eight times, Austin Aqua Fests and Antone’s. Jeff also would play sideman for Toby Anderson.

In 1991 he would record his follow-up to El Jefe’. A very tight performance recorded, but not mixed right. A falling-out with the producer would be a long road for that recording. Jeff bought the master tapes in 1998, then remixed and released it in December 2004, 13 years later.

At the same time, Jeff and long-time pal and Cactus Creek band member, Jay Hudson, would build their first studio, Studio 1621, which would soon become The Hit Shack. Jeff recorded many songs in 1621, but none of them are on CD. One interesting project out of 1621 was Twang Dynasty, instrumental surf music. Jeff would would gracefully leave 1621 to add a band partner.

Meeting Jon Smith (Boogie Kings, Toto, etc.) at Antone’s one night, Jeff and Jon joined forces. A great band only to be killed by bad management. Jeff and Jon played many gigs in the next year before disarming.

Becoming a father in 1992, Conner (named after Eric Clapton’s son) would change El Jefe’s live performance calendar. He became involved in another studio, Lizard Tracks, but not for long.

Then becoming a single parent, Jeff built a home and studio outside of Austin in Cedar Valley. The studio was named Sessions West. This was his first time to build from the ground up. From 1996 to 2002, 50 to 60 CDs came out of Sessions, and at least ten on JAE Records (Jeff Anderson Enterprises). Jeff and Conner needed a change. Jeff’s father, Ted, offered his home in Boerne, Texas. Jeff sold his home and studio, and moved to Boerne. Jeff’s sister, Gail, and all his neices and his nephew, Austin, were in Boerne.

In 2002 Jeff and Conner moved to Tapatio Springs. Jeff then built Sessions West II in an office-type building outside of town. Many great sounds are currently coming out of Sessions West II Recording, Inc. Soon there after, he released his two CDs – The Fever Sessions, from 1991, and Shine, from 2004.